A recent study suggests that within 50 years, there could be more dead people on Facebook than living. The social network is inevitably going to turn into a mass grave, and an archive of a generation’s history according to Big Data & Society. 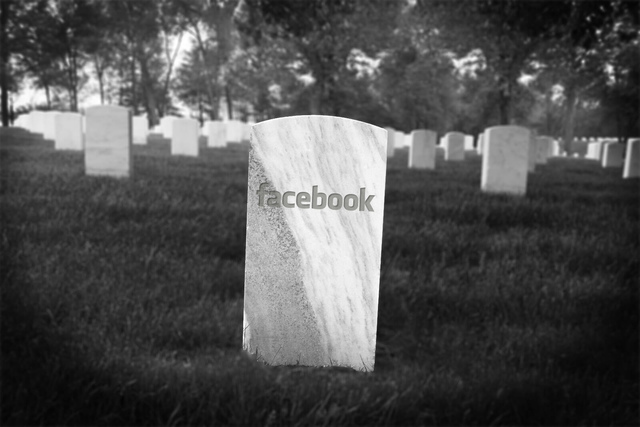 If online users of a given age group- that will most likely die in 50 years- sign up for Facebook and use it effectively, we’ll end up with a digital graveyard. With the continuation of Facebook’s growth, it’s expected that more than a billion users will die before 2100. Facebook needs to face the facts and the numbers so to speak when referring to its user base ages.

According to a Vice News report on how outlets geared toward conservatism succeed on Facebook, Research firm eMarketer estimates that the 55-64 and 65+ age groups “comprise the two fastest-growing segments of Facebook’s American user base.” In January, researchers have discovered that the majority of Facebook users is shared by the elderly.

How Did they Arrive at that Conclusion?

Researchers from the University of Oxford reached the prementioned horrific conclusion by examining Facebook’s growth. They tested out two extreme scenarios by using data from the platform’s Audience Insights feature jointly with the United Nation’s statistics on worldwide mortality rates. The first scenario suggests that no new users have joined Facebook since 2018. The other assumed that Facebook would carry on at its current growth rate of 13 percent globally on an annual basis. In March 2019, Facebook had 1.56 billion daily active users. Now, if the social network’s growth proceeds at the same rate, a number of 4.9 billion users would be dead by 2100.

Earlier this month, the social network giant announced changes to its memorial services. Now, there’s a new “tributes section,” a separate tab for all your dead friends. Back in April, the company issued more controls for its legacy contacts feature. In the event of death, the person whom you gave your digital remains to inherits your account. This means that you have to will your digital remains to a friend or a loved one.  It is up to that person to decide whether to memorialize or delete it.

Facebook COO Sheryl Sandberg wrote in a company blog post about these new features and the tribute section saying: “Over 30 million people view memorialized profiles every month to post stories, commemorate milestones and remember those who have passed away.”

Lead author Carl Öhman, a doctoral candidate at the Oxford Internet Institute calls the digital remains “part of our global digital heritage.” He said in a press release: “These statistics give rise to new and difficult questions around who has the right to all this data, how should it be managed in the best interests of the families and friends of the deceased and its use by future historians to understand the past.”

About the Tribute Section

Although the viewership for viewing memorial accounts is high, Facebook is still trying to sort out how to reckon with its user base’s mortality. Facebook COO Sheryl Sandberg was caught off guard when a Wired interviewer asked what happens if the two people who are each other’s legacy contacts die at the same time. “Oh my god, that’s so interesting, and I wonder if we should have a second;” was her reply.

Losing someone close to you can come off as a huge shock. Neither you nor the deceased have prepared for such a time of grief. While other remains are taken care of in the physical world, there are digital remains online waiting for someone to collect. You can’t help but wonder what it would be like to die and leave your social accounts unattended. The problem is your account would still be active because of two reasons. No one has the credentials to access your account. The other reason is that social networking websites have yet to come up with a plan that tends to death-related instances. Instead of ending up in embarrassing situations like contacting a user, whom you later discover is dead, you can prepare for digital death. Believe it or not, people can have their digital identities removed, deleted or memorialized. However, that is only possible if they plan it prior to death.

Like it or not, even when you are not a part of the physical world anymore, your digital accounts linger behind. In some cases, your family might need to contact support in order to get these accounts deactivated. You should know that you could avoid this by doing it beforehand. Nevertheless, it depends on the amount of control you actually have over your accounts. Additionally, this procedure is not universal. Keep in mind that each platform employs its own settings to deal with its user’s death. Sometimes, you might not even own your content at all. You agree to the terms of service while signing up for the account. It is a complex agreement, and most of us choose to accept it without even carefully reading it.

Facebook Will Become a Digital Graveyard in 50 Years – Conclusion

How does one prepare him/herself to digital death? What about the digital remains? We still have to wait and see how the social network giant deals with its deceased members. It’ll be interesting to witness how archivists, historians, and technology ethicists intend to save users’ collective digital history from a for-profit company with its newly established approach. This might give you an insight as to how we get to reckon with digital legacies across the internet. All of what’s prementioned is based on the assumption that Facebook is going to exist in 50 years. Whether it does or doesn’t, it’s doomed into a digital burial ground either way.

Editorial 0
The Facebook craze has been going strong for many years now. It is one

Editorial 0
We don’t think of it often, but our information is always available online and

BBC 0
Years and Years is this new BBC Drama that follows the Lyons, a busy