NVIDIA Shield TV vs Shield TV Pro – Which Is Better?

Nvidia Shield TV vs Shield TV Pro – Which one should you buy? Streaming has become a very popular segment, and major tech companies are eyeing to grab a larger pie of this fast-growing sector. From behemoths like Apple and Amazon to old-time players like Roku, everyone has hopped on the bandwagon! Even Nvidia, a brand associated with PC gaming has not been able to resist the temptation. Its gaming oriented streaming device titled Shield TV created quite a splash in 2015 when it debuted. It did have some downsides, but the successor aka Shield TV 2017 succeeded in ironing out most of the glitches to such an extent that is has been dubbed the flagship of Android TV. However, Nvidia has also released a Pro version at the CES 2017. It can make choosing the right contender a tad difficult for you. We’ve prepared the following Nvidia Shield TV vs Shield TV Pro comparison in the hope it will make your final decision easier.

NVIDIA Shield TV vs Shield TV Pro – Which Is Better?

Choosing between the Nvidia Shield TV 2017 and the Pro version can be confusing. Both the streamers come with the solid spec and satisfying performance on the key grounds. A thorough analysis and comparison can make the task easier for you.

The Nvidia Shield TV 2017 and Shield TV Pro differs in design, to begin with. If you saw the first version of shield TV, then you will find a resemblance with the first device and Shield TV Pro. The Shield TV 2017 is more compact, and first is cramped spaces better. It weighs only 250 grams against the pro’s 654 grams. The styling is quite similar despite the big difference in size and weight. 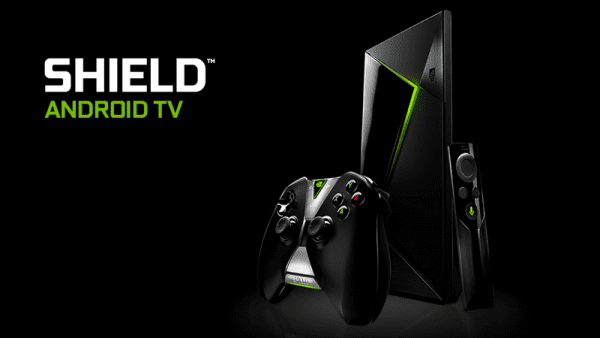 It is only natural that the Nvidia Shield TV 2017 Pro will have a better spec than the Shield TV 2017. In the Pro model, you get micro-USB slot as well as microSD slot. These are not there in the standard Shield TV model. However, both models feature USB ports and HDMI. The Pro has a mammoth 500GB HDD as opposed to the 2017 Shield TV’s measly 16 GB internal storage. The rest of the spec is the same on both devices. Both of them ship with a bundled remote. Both devices are powered by Nvidia’s much-touted Tegra X1 processor and 3 GB RAM. 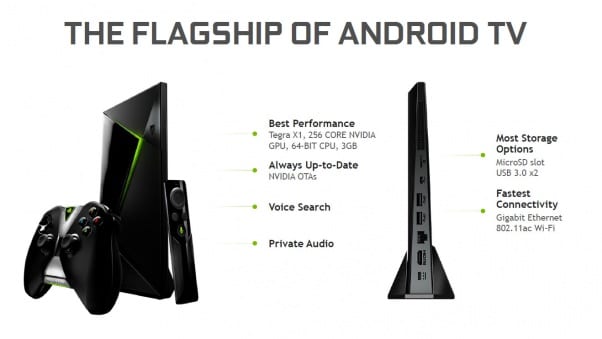 There is not much to segregate the two devices as far as streaming and feature list are concerned. Both devices allow you to stream HD content from services like Netflix and 4K HDR content is supported. These devices also support Amazon Prime Instant Video as well as Hulu. As for gaming, you can stream directly using a PC or use the GeForce Now subscription service. Both of them support Google Assistant AI feature. Both devices have support for 802.11ac Wi-Fi and run on a new version of Android TV powered by Android 7.0 Nougat.

This is where the biggest difference exists! The 2017 Shield TV costs a whopping $100 less than the Pro sibling. The Pro version is clearly not aimed at those with a modest budget. 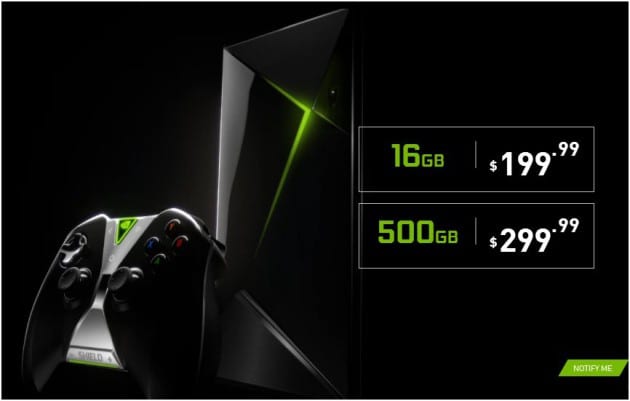 Both the Nvidia Shield TV and Shield TV Pro are perfectly suited for Kodi. Their impressive processing power allows them to seamlessly handle the Kodi 17 Krypton app.

As with any other streaming device, the apps and channels you can get on your Nvidia depend on your current country of residence. Americans, for example, get to access channels like American Netflix, HBO GO, and Hulu. All these apps are geoblocked outside the USA. In order to bypass regional restrictions, you need to spoof your Nvidia Shield’s location using a virtual private network aka VPN. The process of setting up a VPN on any Nvidia Shield isn’t all that difficult; you don’t have to be a tech-freak to figure it all out. The benefits you get though are immense.

Nvidia Shield TV vs Shield TV Pro – Which One to Buy?

This can be a tricky question even after comparing the two streaming devices, as it is. The most important factors that will help you make the final choice between the duo is the storage space. Think of it from a practical perspective. 16 GB storage will be covered faster than you can imagine and 500 GB HDD can accommodate a lot of games and music files with ease―even though that is not unlimited storage. Hey, life is not perfect!

If you live in a cramped apartment and every single inch matters, then the Pro model may be cumbersome for you. The remote is the final differentiating factor between the two. Think if you want a common remote for controlling the TV and to be able to use it to listen to songs too and to be able to manage the media content is something to consider as well.